Presenting you Common English Phrases (Learn English Basics). Learning Videos for Grammar . Loads of giggles are guaranteed! Sure you will love watching it.

Happy Bachpan a venture by "Golden Ball Musico Pvt Ltd" Chandigarh.
Our motto is to educate with Moral Stories and Educational Songs in Hindi and English.
"Happy Bachpan" Golden Ball is one the leading brand for animation in India.
Famous Songs are sung by Alka Yagnik and Shaan famous Bollywood Singers.

Enjoy & stay connected with us!

Armed with his powerful new weapon the Gatling Blaster, Blakk's unstoppable battle train threatens to run roughshod over all of Slugterra — unless Eli can master his new Double Barrel Blaster and come up with a powerful fusion move in time to stop it.______ [FULL EPISODE] | Slugterra: Episode #

When the punks in the Hooligang cruise into Quiet Lawn Cavern, they think no one there’s got the guts to stand up to them so they trash the place. And they’re right — until Eli and the Shane Gang come to town!

Dr. Blakk has succeeded in creating a gap in the magical slug-energy barrier that protects Slugterra, opening the way for the evil Darkbane to tunnel their way up from the Deep Caverns. Eli and the Shane gang must stop this at any cost. Now armed with a selection of upgraded slugs, blasters and armor, they take the battle to Dr. Blakk's front door. While his team slugs it out against Dr. Blakk's minions, Eli takes on Blakk himself once and for all!

Deep in the underground world of SLUGTERRA, young ELI SHANE and his crew of SLUGSLINGERS fight for justice, dueling it out using magical transforming SLUGS fired from amped-up customized blasters!

Slugslingers of all types and loyalties roam the known caverns of the world, battling it out in friendly duels or intense clashes. But there is one who stands out from the rest, a beacon of justice in the world known as THE SHANE. Eli’s dad, Will Shane, was this hero until he went missing years ago, and now Eli must travel down from our world to take up the mantle his father left behind.

Eli may have the name and the genes, but he’ll have to work hard to prove himself worthy when it comes to the other slugslingers. He and his team will have to master the art of SLUGSLINGING; collecting new slugs and learning to understand the tough little creatures’ constantly evolving powers. Luckily they get to do it while charging around on cool mecha-beasts and modding out their awesome blasters!

There's KORD, the troll mechanic who fixes the team’s mecha-beasts and upgrades their slugslinging gear. This mountain of muscle has a big heart to match his giant biceps, and a wicked slinging arm of his own.

PRONTO, the proud and knowledgeable molenoid tracker is a master rogue, lover and adventurer… or at least that’s how he tells it. For a tracker his sense of direction is surprisingly awful. Luckily his Slugsniper rifle aim is pretty good! He eventually gets the team where they need to go; it’s just too bad he’s been kicked-out of almost every cavern they hit!

And TRIXIE, a spunky young girl whose dream is to create an award-winning documentary on the slugs. These funny little creatures have feelings, a chirp-based language, and a society all their own, which she’s determined to reveal through her hilarious one-minute Slugisodes. No slouch on the slugslinging field, Trixie’s blaster packs a mean slug punch! Though she likes to keep an eye out for unusual slugs, Trixie’s always got her head in the game and can often spot an exit or a smart strategy when the team is caught up in the fight.

But it’s their leader ELI who keeps the crew together. Despite his young age, his natural ability means he’s the hottest new slugslinger in town, and his wit is as quick as his draw. The first can get him into trouble, luckily that second thing gets him out of it! His innate understanding of slug psychology means that all his slugs are as loyal as they come.

There’s one slug who stands out from all the others, Eli’s best slug buddy BURPY. A fire slug with some digestive issues, Burpy was part of Will Shane’s arsenal until he was sent to find Eli right before Will went missing. He’s Eli’s faithful companion, an ultimate fire based weapon and master slug strategist. He also acts as lieutenant to Eli’s army of slug buddies.

The gang has to stay alive and stick together when it comes time to face the dangers of this unpredictable world, or duel against other villainous slugslingers.

Not that easy, especially when the evil master boss DR. BLAKK is watching their every move from the shadows and challenging them at every pass! A powerful slugslinger, Blakk has transformed his slugs through the dark science of ghouling, turning them into ruthless feral shadows of their former sluggy selves.

The owner of the massively powerful Blakk Industries, BLAKK's almost got the world just where he wants it, with his minions crawling all over SLUGTERRA. But he’s far from done. He’s got one goal: ghoul all of the slugs to achieve limitless power! It’s probably safe to say that as bad as Blakk is, these guys are way worse.

But despite his growing power, BLAKK fears one name: SHANE. Eli’s dad Will was the only man who ever beat Blakk in a one-on-one duel (and mysteriously disappeared afterwards)! For now, Blakk isn’t too worried about this upstart kid. But, he is going to keep his eye on the little annoyance and perhaps assign a few trusted minions to deal with the problem while he focuses on his darker goal of ghouling slugs!

ELI hates the fact that BLAKK treats wonderful magical SLUGS in such a terrible way. Despite his youth, he's vowed to do whatever it takes to stop BLAKK—even if he has to go to all caverns to do it!Cartoon House

The Slug Run is the ultimate, off-road, no-holds-barred, cross-cavern Mecha Beast race. Unfortunately, the only thing lower than the odds of beating the three-time champ, who's now racing for Dr. Blakk, are the odds of Eli making it to the finish line in one piece!

The Shane Gang follow Diablos Nacho to Molemound — the Molenoid home cavern. Pronto doesn't want to go — and not because he's in trouble. It turns out Pronto is the rightful KING of the Molenoids. He's been ducking the crown for years since the king's main responsibility is settling arguments and fixing leaky plumbing. But Pronto must play king for a day while the Shane Gang follows Nacho into the great Molenoid library to stop him from taking a valuable map. Meanwhile, Pronto faces an unwelcome challenge for the throne by his Life! Long! Nemesis! Seedo.

Burpy is sick, and the only thing that will cure him is a trip to the Lightwell — a mysterious, hidden power source only slugs (and the Shadow Clan) know the way to. Burpy can't make it on his own, so Eli vows to take him there. He convinces the Shadow Clan to point the way, but the journey is fraught with peril. Meanwhile the rest of the Shane Gang must fight side by side with the Shadow Clan when Blakk's minions attack.

A mysterious creature is draining the energy from all the slugs in a distant cavern, and the residents are offering a rich reward to whoever can stop it. Mercenaries come out of the woodwork hoping for the prize, but the Shane Gang aim to stop it for free. That's what they do. It turns out this creature is more dangerous than anyone could imagine, and one by one, the hunters are taken out of the game—leaving only Eli and the reviled STOCKER remaining. The two forge an uneasy alliance, but can a mercenary like Stocker really be trusted?

Dr. Blakk has been captured! Now it's up to the Shane Gang to transport him to Stalagmite , the only prison that can hold him. To do so, they're going to need some serious speed. That's just what they get when we reveal Kord's new modifications to their Mecha Beasts! But will it be enough to stand up to Blakk's own newly-designed super vehicles?

While the rest of the Shane Gang defend the perimeter from the legions of Blakk Guards sent to free Dr. Blakk from prison, Eli interogates the captured villain. Surprisingly, Blakk feels like talking. He reveals where he came from, how and why he discovered ghouls and most importantly of all, Eli learns the truth about what happened to his father.

Eli's got a new slug recruit! But in the heat of battle, can this rookie go from frightened novice to the hero of the day?

Dr. Blakk and his Darkbane minions have discovered a way to make their ghouls faster and stronger — giving them an edge over the Shane Gang. In order to even the odds, Eli is going to need his most powerful slugs and an upgraded blaster from Redhook. The only problem is, Dr. Blakk already has the slingersmith working for him… Eli and the gang attempt a daring rescue mission to free Redhook, but along the way discover Blakk has a much more sinister plan in the works.

Dr. Blakk has succeeded in creating a gap in the magical slug-energy barrier that protects Slugterra, opening the way for the evil Darkbane to tunnel their way up from the Deep Caverns. Eli and the Shane gang must stop this at any cost. Now armed with a selection of upgraded slugs, blasters and armor, they take the battle to Dr. Blakk’s front door. While his team slugs it out against Dr. Blakk’s minions, Eli takes on Blakk himself once and for all! 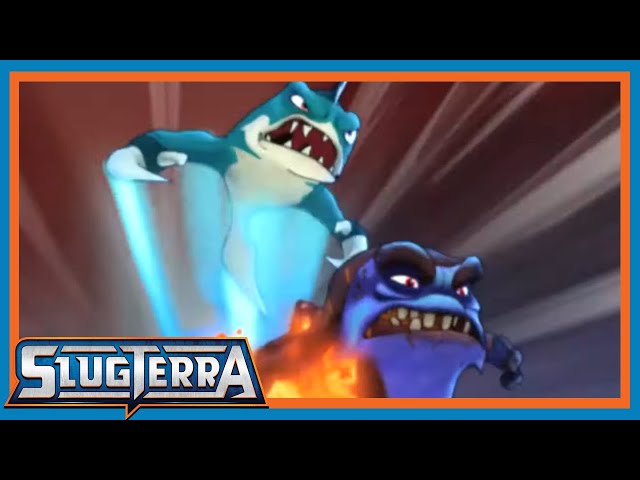 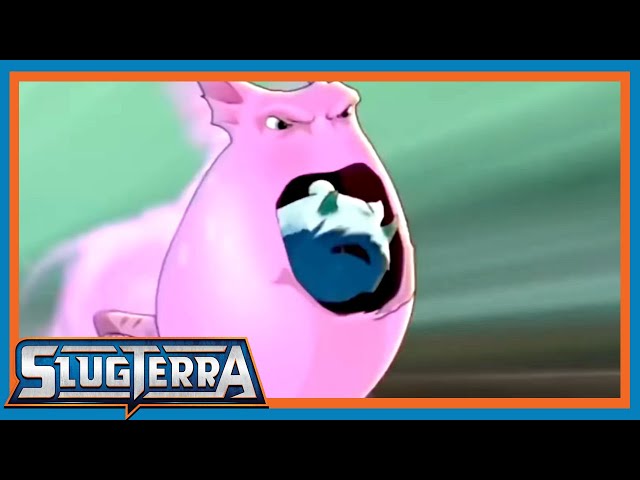 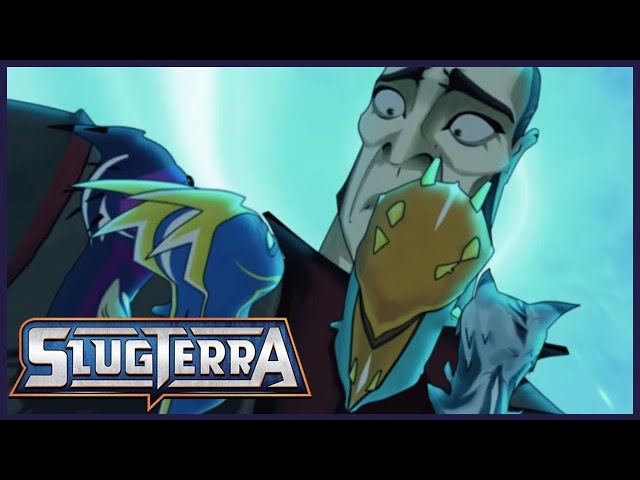 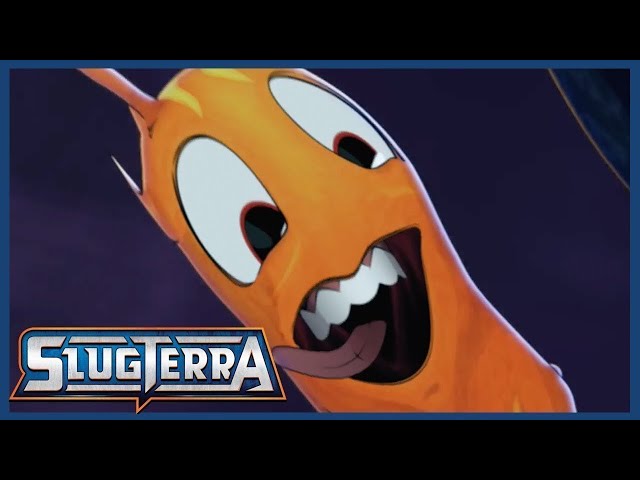